A cycling press trip riding on the cobbles of northern France 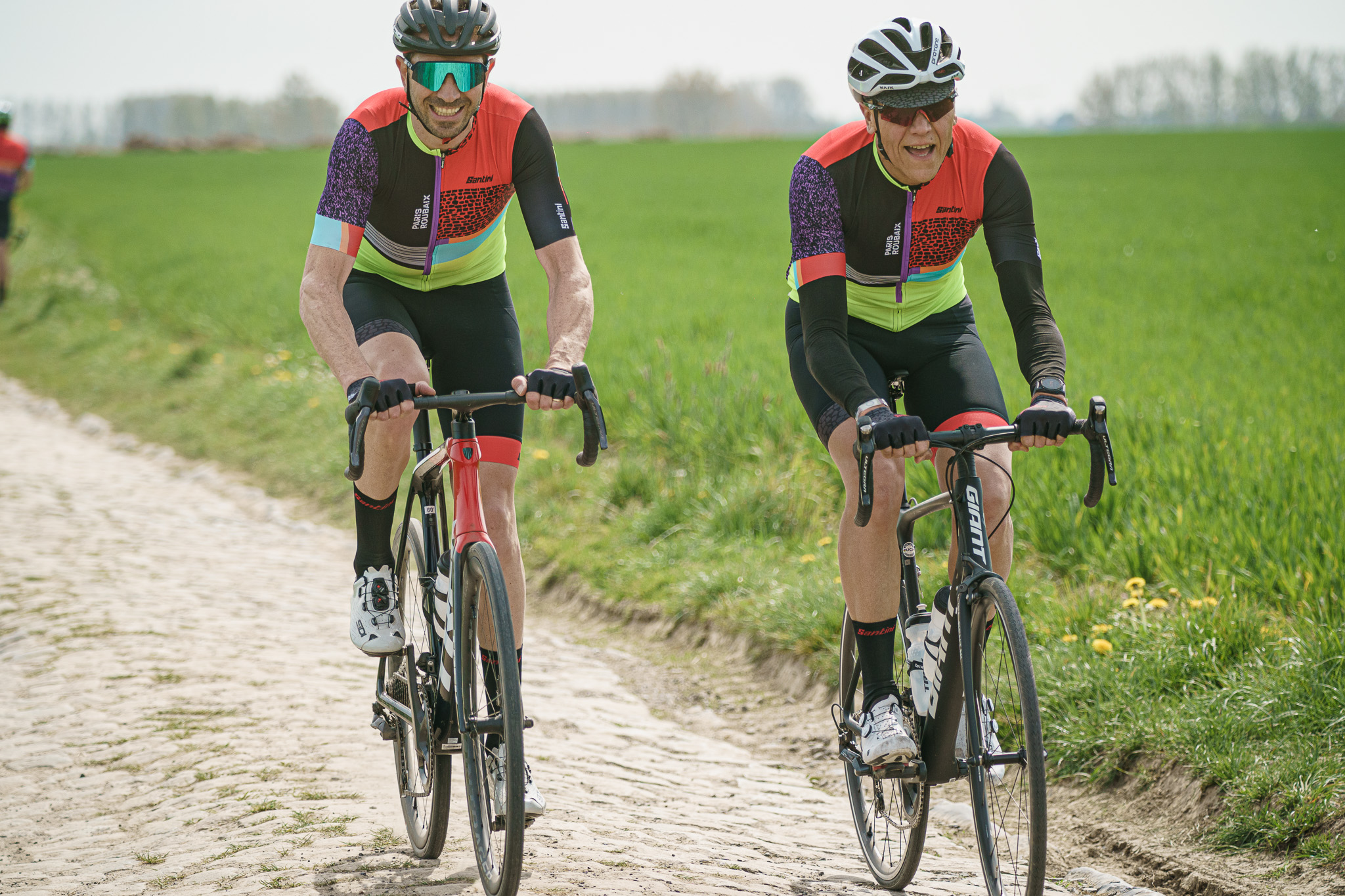 This Easter, while we were all tucking into our Easter eggs with our feet up two British cycle journalists were having a very different Easter experience. They were on a cycling press trip to experience a ‘taster’ of the Paris-Roubaix otherwise known as “The Hell of the North”.  The trip was devised by Polartec and Santini to launch Santini’s new dedicated Paris-Roubaix ranges. This included Santini’s all-weather L’Enfer Du Nord jacket made from Polartec NeoShell.  Suitable for all weathers, it’s clear from the name of the jacket – it translates to ‘Northern Hell’ – that this race is no walk in the park.  Brutal is probably more apt but don’t take it from us. Here’s how our two cycle journalists found this cycling press trip …

“What was it like seeing the Paris-Roubaix?” asks Liam Cahill of Road.cc “It’s pure chaos if you’re watching it on TV and if you’re actually there it takes that and heightens it by a factor of 10.  There are just vehicles, dust, and people everywhere.  It’s the best fun ever”.

The race is one of the oldest in the road cycling calendar and covers 159 miles of challenging terrain including 30 notoriously difficult cobbled sectors.  Tough, it may be, but this doesn’t stop the pro riders from reaching some impressive speeds. This year’s winner – INEOS Grenadier Dylan Van Baarle – averaged a speed of 45.792 kmph (28.45 mph) and set a new record.

“It’s incredible to see the speed at which the riders ride.  You see countless riders with broken bikes that they’re trying to find their helpers to fix. You see numerous cyclists with horrific-looking injuries.  British rider Lewis Askey had the biggest gash I’ve ever seen with blood caked all over his shin and knee.  I don’t know how the hell he kept going!”

Aaron Roe, a freelance writer for the Indy, agrees “the speeds the pros went blew my mind.  It’s mad at the side of the road and you can feel the vibration of the riders as they thunder past.  The atmosphere is insane”.

The Santini/Polartec cycling press trip included a route for the media to ride the day before the women’s race.  Like the race route, it gave the team a feel for what the pros were going to be experiencing over the weekend.

“We picked up the Mons-en-Pévèle at the halfway point which is one of the key sectors of the race.   I’ve raced cobbled stones before so it wasn’t a huge surprise but when you see the harshness of these ones it’s staggering how fast the riders take those sections and how fast they corner on those cobblestones.  There is no grip.  It’s crazy” says Cahill

“I’ve also ridden cobbles here in the UK but they are nothing like they are over there: the gaps in between are bigger and the edges sharper.  We did nine sectors of the race; the pros do 30.  Our nine sectors covered 12 km of cobbles vs 55 km in the actual race.  It was harder than I was expecting” says Roe, “the cobbles were really rough: they destroyed my hands.  It was shockingly hard”.

This wouldn’t be a Santini/Polartec cycling press trip event without some cutting-edge kit to trial.  Enter the L’Enfer Du Nord jacket using Polartec NeoShell.  This world-beating breathable waterproof fabric is at the top of its game for challenging rides in inclement weather like this ride … usually.  You see this Easter the weather was positively balmy averaging a glorious 20 degrees with not a cloud in sight.  But as both Aaron and Liam know you can always rely on the Great British weather.

“I’ll be using it this weekend.  I’m riding in Wales so it’ll definitely rain!” says Liam.  “I’m looking forward to putting it through its paces too” says Roe “I’ve used NeoShell before and really rate it.  When the Polartec team spoke about the NeoShell in this jacket it sounded great: the membrane has improved durability helping the kit to last longer.  The weather there was so good but I think if it had been wet Santini’s L’Enfer De Nord would’ve proved to be a brilliant piece of kit”.