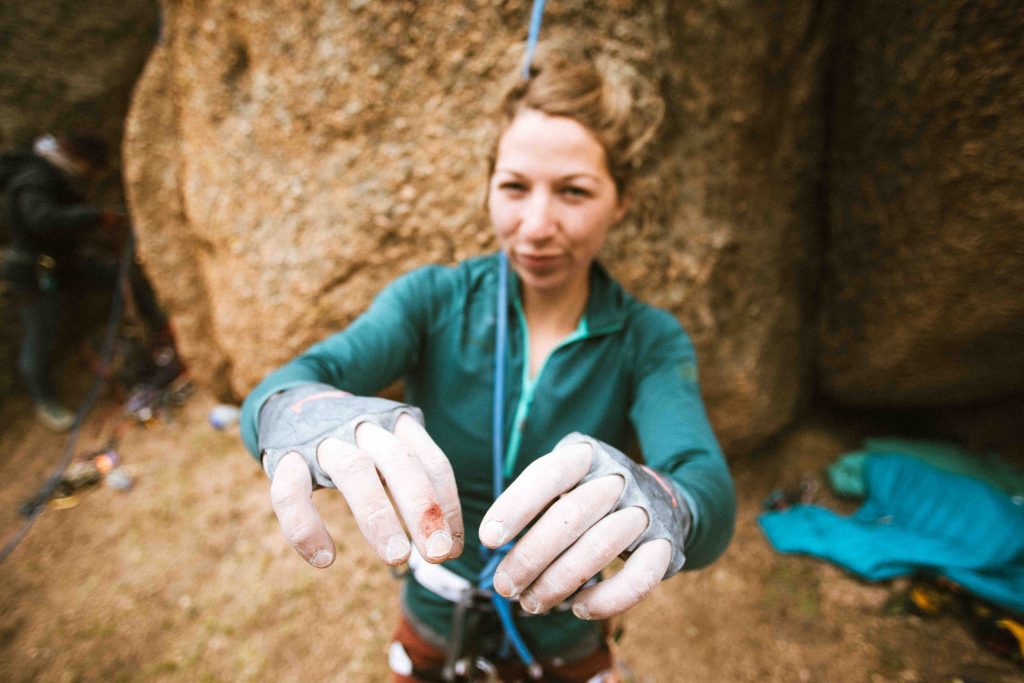 Mammut athlete and climber, Madeleine Cope, has just returned from a three-week trip to Mongolia – not the first place you think of as a climbing location!

At the start of May, Madeleine Cope, together with friend and climbing partner, Hazel Findlay headed off to east Asia. Mongolia isn’t your traditional climbing scene; it doesn’t have a long history of climbing so there are is lot of unclimbed rock – but you have to search for it! If there’s anything Madeleine has learnt from her trip it’s the logistics involved in finding climbs in a relatively unclimbed-country. “We were stepping out of the box. Going somewhere with a blank slate.” Says Madeleine.

But this is actually why they chose Mongolia. And, in fact, their three-week trip resulted in Madeleine achieving a personal first – having never cleaned or opened up a climbing route before, this rugged country gave her the opportunity: “We got there and thought ok let’s see if we can find some climbs and be the first people to develop an area. I have never been the first person to climb a route before – only established routes. This was a special achievement for me. The first person to look at a piece of rock and pick a line up it that would be fun or challenging.”

So how does that change her experience of climbing. Is it more difficult? More daunting?

“At first,  it pushed me out my comfort zone more than I expected” she says. “I realised just how much confidence I was subconsciously gaining when I attempted a route that someone else had already climbed. When I know that it is physically possible. When you stand underneath a new route you just don’t know how hard it is going to be. There are no grades to guide you and that changes your perspective.”

“The feeling of achievement when you do climb a new route is almost irrespective of how difficult the climb is. It’s more that you had the confidence to step off the ground and into the unknown. It’s a massive sense of satisfaction, and humbling to have such a rich climbing experience no matter the difficulty.”

Together Madeleine and Hazel are producing a film based on their adventures. It’s due to be released as part of the Reel Rock Tour in autumn of this year.

Speaking about Hazel, Madeleine comments: “Hazel has played a big role in my climbing career and development. Particularly as I step more into a full-time climbing role. I have never made a film before so it was an interesting component of the trip to be documenting our story. Humans have evolved telling stories and I think it gives you an opportunity to think more deeply about your own experience in order to relay what you have experienced.”

Logistics weren’t Madeleine’s only difficulty. Once she and Hazel reached each destination they then had to work out actually how to clean the routes: “Abseiling, scrambling, poor belays – we had a lot of amusing times! There was a lot of problem solving ‘off the rock’ – I am used to trying to work out climbing sequences, how to use my body in different ways on the rock, but working out how to check out the climbs was a more logistical challenge. Sometimes we just found a route which looked cool and thought let’s climb and see how high we can get!”

Mongolia’s weather wasn’t quite what they expected for May. “It’s known for its harsh weather – both during the summer and winter. I thought we might get more of the summer weather but it snowed a lot. The nomadic people said that the weather has changed a lot with global warming and it is jeopardising their way of life. A big part of the trip was actually finding the good rock that we could climb. It was a very different experience to previous climbing trips. The sun baked rocks were covered with lose grains of granite, or dirty with lichen.

“We were also aware of how remote we were. If we had fallen or had an accident we were in the middle of nowhere, we had often driven off road for hours, and there was no mountain rescue. It’s not the sort of place where an ambulance can just turn up and that produces quite a psychological element to the climb.”

Luckily, being a Mammut athlete, Madeleine was kitted out in some of the best kit available. Her helmet is the Wall Rider – a newer model for Mammut featuring MIPS technology, “What’s great is how light it is and how comfortable it is to wear.” She says. “Comfort is a massive factor. Because if you’re doing a hard climb you don’t want to be distracted by something that doesn’t feel right, is too heavy or falls over your eyes. It’s very important that you almost can’t feel you’re wearing it.”

Madeleine’s harness is the Mammut Alnasca – and again she sites its comfort as being one of the most important factors behind this choice, “It’s literally your attachment to the safety line so it’s incredibly important. But the bonus is how comfortable it is. When you are putting up new routes you spend a lot of time in your harness. I don’t know how they make them so lightweight! It’s like you’re not wearing anything which gives you a lovely feeling of being free when you climb.”

Madeleine described the weather in Mongolia as crazy! Her Mammut clothing sure came in handy! “It was pretty wild. I wore my Aconcagua hoody loads. Its cut on the longer side so it sits under your harness nicely. And there are loops in the sleeves to go over your hands. It’s zip up, which is important because you start a climb cold but get hot half way up and it’s easy to open up. Then, most importantly, there’s a chest pocket for a bar or some sweets because it’s hungry work putting up a new route!”