Isoloation? Try skiing solo to the South Pole like Wendy! 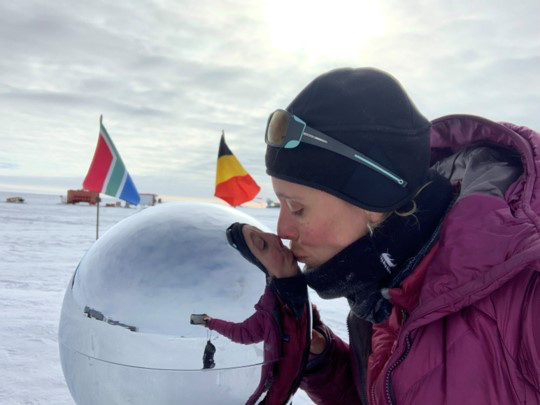 Here at Spring we class ourselves as an ordinary bunch.  So does Wendy Searle.  The only difference is her ordinary includes walking to the South Pole.  At 42 Wendy is the  7th woman to ski solo to the South Pole, a challenge she decided to set herself having only skied once before.  This is her story.

What on earth made you decide to do this?

“I met a team who were doing an Antarctic crossing and I got hooked on the idea of polar travel.  I believe there’s one big adventure in everyone.  And I wanted to raise awareness for the Youth Adventure Trust.  I’d been away on some of their camps and seen the difference it makes to young peoples’ lives.  I remember sitting on the sea wall next to a young person.  She said ‘I’ve always said I don’t want to take part and have always sat on the side-lines, but the truth is I do want to take part.’  This was me taking part.”

We know the guys at YAT – we’re doing an Ellis Brigham walk with them in October to raise money. We think it takes a pretty special person to want to do this though.  How hard was the training?

“The physical training was intense – six days a week, twice a day tyre hauling or cycling.  I’d lie in rivers too.  It wasn’t just the physical prep either, I had to build myself up mentally too, so I had time on my own in Iceland.  Learning self-reliance is tricky, and Iceland is a crazy wild place.  I had one ski lesson. Now I can only ski uphill not downhill!”

Wow we need to up our training regime for the 10 Peaks Challenge! So what did the start look like?  Were you tempted to climb back into the plane?

“I had a sledge [called a pulk] with all I needed to survive for 715 miles: food, tent, cooker and a few spare clothes.  I was dropped off at Hercules and set off south and was alone for 42 days, 16 hours and 23 minutes.  I had no inclination to get back into the plane,  but I have to admit, when I was dropped off, I fiddled with my pulk at the start point watching people set off so I didn’t go in the wrong direction!  I knew the way, but I just needed that reassurance.”

We don’t blame you, we would be inclined to do the same! We want to imagine what it’s like.  Walk, sorry ski us through it …

“I had to navigate while avoiding crevassing – they can be inches wide to hundreds of metres across.  The whiteout conditions meant you can only see the tips of your skis and your compass and it was uphill all the way.  I’d ski for 11 – 12 hours every single day.  The distance is just incomprehensible.  Then I’d go to bed, get up at 0630 and melt snow to make water, rehydrate my breakfast before packing the tent away and doing it all again.  I never had a lie in, preferring a fixed routine.  On Christmas Day there were all sorts of people out there celebrating but I didn’t have any treats on that day.  It was the key for me: lots of tiny steps added up to one, big whole.

What were you most worried about before you left?

“I should have worried about the mental challenge, the mental mountain you have to climb every morning to get out of the tent and get skiing again is monumental.  After a while you realise it’s going to take weeks and weeks and you’re on your own and exhausted.  I didn’t give this much thought before I left, what was actually keeping me awake at night before I left were things like skiing in the wrong direction, getting lost and falling into a crevasse.

Very valid worries they are too.  How did you cope?

“There really is nothing there and you can never switch off which is exhausting.  I would look forward to my campsite at the end of the day.  So much so that I would feel genuine sadness leaving this arbitrary, safe place behind the next day.  But once I was out of the tent in the morning it was all fine again”.

How did you feel when you reached the South Pole?

“Lighter!  I had lost 12 kilos but seriously it was transformative.  When I saw it in the distance, I was 9.6 nautical miles away (approx. 12-13 miles) so in effect a day’s skiing, but until I saw it I didn’t ever relax or believe that I could make it.  Even now I feel emotional when I think about it.  I believe anyone can overcome anything.”

Well we think you did really well. You must have learned some valuable lessons while you were away, after all you were just alone with your thoughts for company. Any wisdom you can impart?

Choose your attitude: “I drew a heart on the inside of my tent everyday to encourage myself that I was genuinely loving it. it was an alternative to lines that prisoners draw on their cell wall. In reality there were probabably only about three days where I thought “Yes, I’m genuinely enjoying this”.

There’s something good to focus on everyday: “When the sun came out you would be so grateful; having made it to the end of the day without dying, that was another one. Looking for the good to focus on in each day is a good mantra for life.”

Consistency is more important than money: “… and if you keep edging towards your goal it’s amazing what you can achieve.”

Want to hear just how gruelling it all was? Listen to Wendy’s daily audio blogs that she recorded during her expedition here.

It’s not just Wendy giving us tips. Check out Pete Webb’s To Do List For Nailing That Zoom Call; Jaime’s Easy Tips For Getting The Most Out Of Your Website, Ian’s Five Steps For Successful Entrepreneurship and Nick’s 5 Ways to Support Your Community

← Even Country Walking's Nick Hallissey Didn't Know What Joys Were On His Doorstep Until Now! Spring's Songs For Camping →