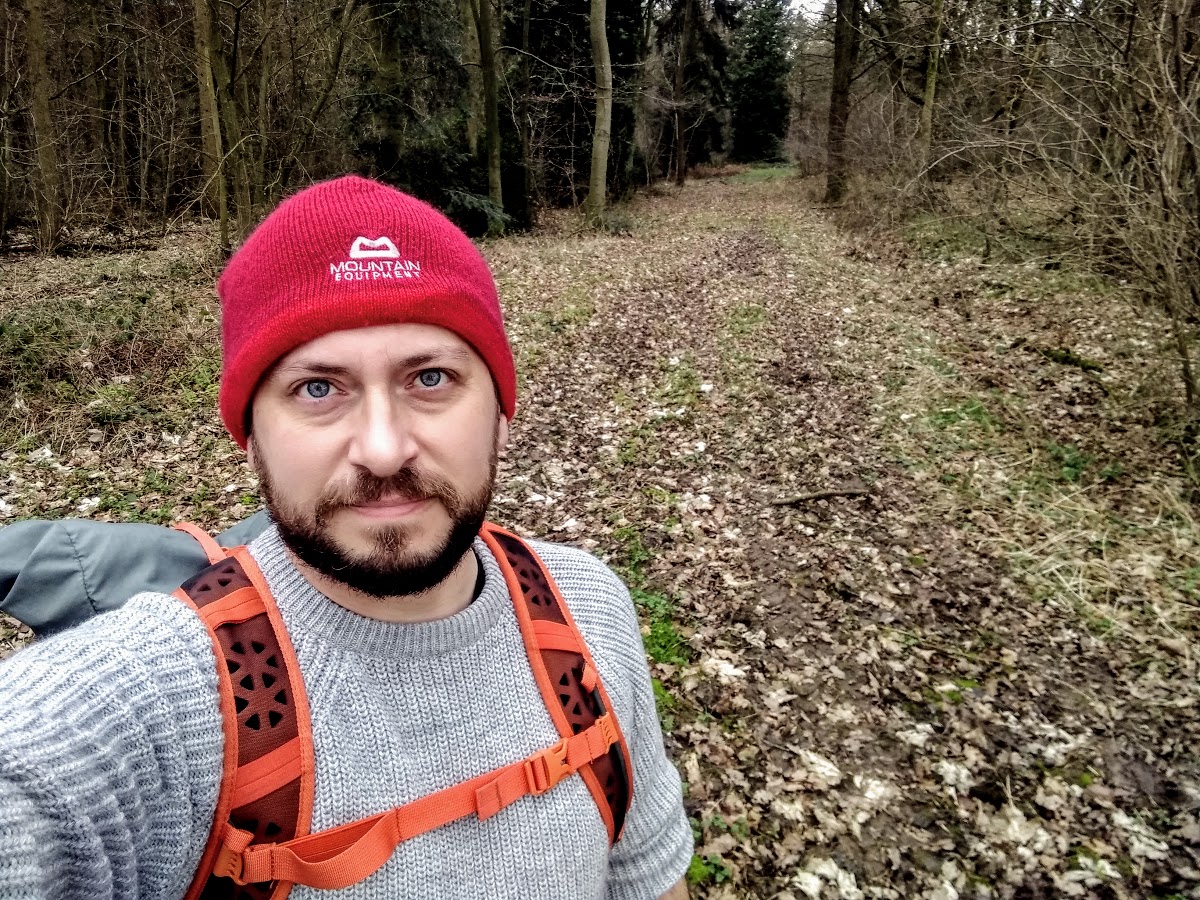 We’re all so proud of the work that our NHS is currently doing and Aquapac’s Andy MacAuley is a cog in that wheel. Part-time Aquapac product designer, he’s currently training to be a Paramedic. He took time out of his busy night schedule to talk to us about what it’s like to drive an ambulance, the biggest thing he’s learned and why – after 22 years at Aquapac – he’s still one of the more recent employees.

We’ve known you a long time Andy and we know that you’ve dabbled in all sorts of things. You’ve had an interesting journey to right now, tell us about it.

I was a bit of a nightmare child for my parents because I used to take things to bits to see how they worked, rather than playing with them. I remember disassembling my bike in the kitchen and having to move the cooker to retrieve ball-bearings, and taking apart Transformers just to see how they worked. I channelled that interest into becoming a Product Designer, graduating from Central St. Martins college 20-something years ago and landing a job as a Creative at Aquapac thanks to my experience with web- and graphic-design which made me a bit of a useful all-rounder. I’ve had a bit of a portfolio-career since then, with Aquapac providing the stability behind other ventures into freelance design, outdoor gear reviewing, heritage house renovation and, for the last 10-years, voluntary Search & Rescue. The common theme in all of these is a desire to solve problems and feed my need for a challenge. A couple of years ago I decided to embark on a longer-term project and train as a Paramedic. I fell in love with the idea after doing a couple of observation shifts on an ambulance as part of my rescue-work and saw a chance to put my problem-solving head to good work in an ever-changing environment. I’ve been on the road as an Emergency Medical Technician, and training to become a Paramedic for nearly two years now (delayed because of COVID19 halting classes). I’m still with Aquapac for a day every week.

You do sound like a nightmare child! Still, always handy having a problem solver around the house and who knew that was the common thread behind all your ventures. Well, you did obviously, but we didn’t! When did you first know you wanted to be a Paramedic?

To be honest, I still don’t know what I want to do when I grow up. Becoming a Paramedic will be a stepping stone to other adventures outdoors. I’m still a gear-head at heart, and see the beauty in buckles, the detail in design and love putting new ideas to the test. Creating a new bag is as much of a kick as helping a patient, so I see myself being drawn towards something outdoorsy, problem-solving, and putting my skills to good use. One thing’s for sure, as much as I enjoy being on an ambulance, night-shifts are really hard work and a young person’s game.  Maybe a new sideline in expedition gear development beckons…

Yep, we can see that. One of us has children that are currently taking midnight walks and it’s not unheard of for them to go to bed at 4.30 am. So yes, a young person’s game sounds about right! Do you get to drive the ambulance?  And is it terrifying when you blue light at speed?

I do drive as part of a 2-person team in an ambulance, usually alongside a qualified Paramedic. We take turns and change role after each trip to the hospital with a patient so fatigue doesn’t set in, and we get a chance to practice skills equally. I do enjoy the driving, and contrary to what you might think, we don’t go that fast. We are allowed to travel at up to 50% over the posted speed limit, but we carry all the risk of dangerous driving, and the faster we go the more difficult it is to anticipate and react to other road users. Driving on blue-lights is much more mentally taxing than normal driving because you’re never quite sure how the next driver or pedestrian will react, so we usually drive at within the speed limit, or just over it to make safe progress. My advice to everyone who sees blue lights behind them is to safely pull left and slow to a stop. Anything else makes our lives much harder and slows us down.

Slow down and then stop. We’ve got it. That’s something we’ve learned, what’s the most interesting thing you’ve learned?

That using an open question and then just listening to the answer flow can start a conversation which exposes people’s problems, worries and needs far better than any other way. That’s true for design, customer service, searching for a missing person, or assessing a patient. “What can we do to help you?” is a simple, powerful opening line.

Good tip! How’s this one: “Tell us about your time with Aquapac”

That works! Aquapac has been making waterproof cases in its own London factory since 1985 and has sold over 5-million worldwide. It’s a really interesting brand which sits in between users and their equipment, so we’ve worked hard to build a reputation for products which are trustworthy, but which don’t get in the way of using the products. There’s always been a balance of ruggedness versus that usability-factor, so we’ve worked closely with myriad other brands over the years to develop a range which is lightweight, simple and reliable. I was swayed to join the brand – and stay so long – because of the passion brought to the business by its Directors, production staff and distribution network. To say it’s a family sounds a little trite, but we’ve all been working together for decades, and sometimes it really does feel like that. Plus, there’s always something new in the pipeline which keeps things interesting.

There is definitely a family feel to the team – John bought Spring PR’s Jo chocolates to say thank you for something she’d done. Nice touch. How long have you been with them?

Twenty-two years. But believe it or not, that still makes me one of the newer employees. It’s testament to the attitude and respect of the Directors that most of Aquapac’s staff have been there for decades and have been supported in side-ventures.

That’s a long time! Crazy to think that they have gone from making cases for Sony Walkmans to waterproof cases that are used by the NHS to keep us safe or maybe it’s not so crazy?

Aquapac’s roots in safety go right back to its second-ever product – a waterproof case for VHF radios used in the marine industry. Over the years that’s remained a focus and we’ve worked with emergency services, healthcare and rescue teams to develop cases which are hermetically sealed against water, particles and infection. In times of pandemic, it’s been invaluable to know that antiseptic wipes and soaps can be used safely to decontaminate the outsides of cases and spare the expensive electronics inside from becoming vectors for nasties.

And we’re pretty psyched that you can use your card and phone’s contactless feature through the cases too.  Go on, tell us more about this feature.

I was in the supermarket yesterday and saw a lady wearing gloves and a mask. She was continually adjusting her mask and touching her face. She then paid by card and typed her pin on the machine wearing the same gloves. The fact is that, despite good intentions in hygiene, people get complacent and slip up, which leaves transferrable particles on surfaces and spreads disease. Contactless payment is one way to reduce the risk from the common surfaces we all touch the most.

Any advice you’ve got for us apart from to stay safe because let’s face it everyone is telling us to do that!?

I think it’s important to stay safe whilst also staying mentally balanced. Isolation and social-distancing has been hard on some people, and the outdoor industry has a chance to be at the heart of encouraging and enabling people to get back outside safely. I predict a boom in outdoor recreation as a reaction to lockdowns, and brands now have an opportunity to develop products which have bio-safety at their core. From protective coatings, hot-washable garments, fashion- and sport-derived masks, coveralls or even washable activity gloves, I think we may see a change in culture worldwide where bio-protection becomes a desirable selling point for many products. But I think the anxiety surrounding protection and infection needs to be managed sensibly, with the message that it’s perfectly possible to enjoy outdoor activities and minimise contamination with just a few, sensible changes in habits. Wash your hands often, be mindful of what you touch, and be understanding of others and their fears.