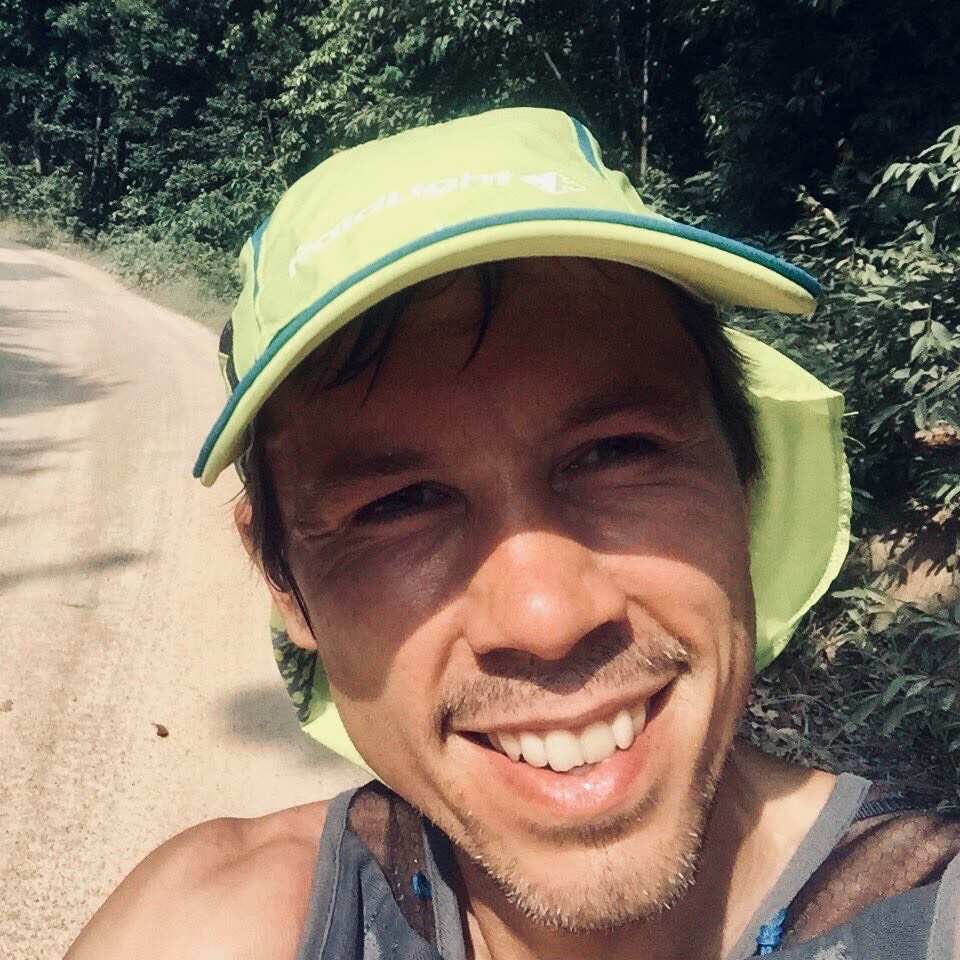 Ever run a marathon?  One Springer has, another has run a half.  Both agree it was hardwork, exhausting and painful.  Imagine running 55 miles a day over 41 days.  We can’t, absolutely not.  One person that has imagined running it in every minute detail though, is 44-year-old Kristian Morgan.  Already the British ultra-marathon champion, he’s ready to take on the 2193 mile Appalachian trail this June.  We caught up with him on his impending challenge and this is what he had to say …

Between us, here at Spring, we’ve run one-and-a-half marathons.  You’ve run 130!  Where are we going wrong?

“Maybe it’s my amateur boxer background?  I got into training through that.  We’d run to the local pub and back again.  When I saw the Wolverhampton marathon advertised in the local paper in 2000 I thought, yeah, I’ll do that.  It took me 4 hours 46 minutes.  My primary goal: don’t walk.”

And then, 13 marathons later, you thought, hey, I’ll give ultra-marathons a go!  Right?

“Yes, I guess so!  My first ultra was 35 miles, nothing too onerous.  It was loops of a reservoir.  Up to then I’d never walked any part of a marathon.  Mile 28 and I was at a really low point.  Like that famous “wall” you hit in a marathon but in an ultra, it’s taller and thicker.  I gave myself permission to walk.  After a couple of minutes, I was telling myself I was a loser and a quitter.  Once I got to the finish line though, I realised that I was none of those things, a small walking break is sometimes needed.  I had got through it.  I had reached the end.”

“I think of myself as a warrior.  In ultra you can enter that warrior state of mind.  The opponent is you.  You’re fighting against yourself.Once you get passed a barrier you never forget it.  I will continue until I get to the next mental and physical block and that’s when that warrior mindset kicks in.  It’s like an internal battle.  And each time I win that battle I get physically and mentally stronger and my self-esteem grows.”

Gosh, that sounds like a great life hack.  You use it for ultra-running but do you think this mindset could apply to everyday scenarios?  Adopting that warrior stance, could it help strengthen our mental health?

“Absolutely.  Lanny Bassham an Olympic Gold medallist and creator of the Mental Management Systems also thinks you can.  He believes that as a person your self-esteem is either growing or shrinking.  And that’s down to choices that you make, the things you say to yourself or about yourself to build it up or break it down.  For me ultra-running helps build my self-esteem.  I’m setting myself a goal and achieving that goal and my self-esteem grows.  The opposite would occur if, say, I was always talking myself down to other people.  Focusing on an injury for example and telling others that I’m  not as fast as I used to be – that would reduce my ability and speed straightaway.”

No negative talk then.  We’ve got it!  Although it’s not always as simple as that is it …

“Life in general can chip away at a human being’s self-esteem.  It’s a case of building up a big enough shield in life to reflect the negative and open a window wide enough to absorb the positivity.”

“It’s the potential to be one of the best in the world.  I’ve chosen the path of running.  Some choose corporate or music and I’ve chosen sport.  The opportunity to measure myself against people who are the best in the world and potentially get the record myself is what drives me.  I feel privileged to have found ultra-running.  For someone else it can be violin playing or building a successful business.  It’s about getting as close to that state of perfection as possible.  My hobby is my relationship with pain.  Obviously ultra-running is physically painful and my hobby gets me to explore pain and go beyond it.  It’s very meditative.”

“I hold the record for running Britain’s Longest National Trail.  Next stop is best in the world.  To be that I need to tackle the Appalachian Trail.  This is the longest, most sought-after accolade, governed by fastest known times (FKT).  Not only is it 2193 miles long but it’s got 16 Everests in it, plenty of rocky terrain and goes through 16 US states.  And it’s hot.  Boy is it hot.”

Well, with our limited experience of marathons we can honestly say, hand on heart, that that sounds challenging.  Have you run any of it before?

“I was there in 2018 when I was invited by the Belgian Karel Sabbe who is the current record holder.  We met in Morocco and we got along really well.  For one third of Karel’s attempt, I was there with him, carrying his food and water.  Karel would run 53 miles a day, I joined in a third of the way through the day so was running 36 miles a day.  I did that for 15 days, carrying his stuff.  That gave me a real taste of what it was all about.”

That’s put our minds at rest, a bit anyway.  You know how hot it can get because you’ve been there.  You know what it’s like to get up in the morning and run another 36 miles because you’ve done it.  We’ve worked out you have run 540 miles of the Appalachian trail already.  That’s some feat!  What’s your target?

That’s a lot of time with your thoughts.  Do you plan on mixing it up a bit, plugging yourself into a running playlist or something?

“Most of the time I’ll be alone with my thoughts.  I spent many hours with Karel and only once did he listen to music.  He told me that when you listen to music it releases endorphins and you could damage your quads as a result simply by running faster than you should .  And it is amazing how, when you’re doing something like this, music acts like a drug.  I plan to use it strategically.  Plus, I need to have my wits about me: there are bears out there and tricky terrain to negotiate.  Music is an amazing drug when you’re out on the trail but you have to use it wisely.”

Music is a drug.  That’s a new one on us but we completely get it.  What else will you be using on your run?

“My LEKI Micro Trail Race poles.  You can wear the glove that clips into the pole and I’m so efficient at using them.  I stow them in the back of my bag when they’re not in use.  I’ll be eating lots of veg, fruit meat and fish.  Oh and McVities milk chocolate digestives.  Again, I need to watch those as they’re my special treat.  I take three out on a run at a time.  I’m currently putting Darn Tough socks through their paces too.  They are, I have to say, working out pretty well.”

We’re really interested in night-time – surely, if you can skip a couple of sleeps you can knock a few hours, even a day off your run?

“I’ve always been an 8-hour a night guy.  I never thought I could function on less than that.  When I did the 630-mile south west trail though I averaged 4.5 hours sleep.  On the last day – night number 10 – I had a 30-minute power nap instead of going to sleep and did the last 100 miles in one push.  I lay in my tent, shut my eyes and when I woke up after 30 mins, I felt like I’d had a full night’s sleep.  It was amazing.

When I go to the Appalachian trail, I need to run 55 miles which will allow me more sleep.  I know that Karel had at least six hours sleep when he broke the record.  Six hours sleep for me will be a luxury.  I plan to get up at 3.30 in the morning so will be running for two hours in the darkness.  That way I can look forward to the sunrise.  I’ll be on the go for 14 to 16 hours a day and there’s no avoiding the hottest time of the day but luckily, I like the heat.”

You’ve trained in Ethiopia haven’t you.  Mo Farah’s a big fan of running in Ethiopia.  What is the biggest lesson you learned there?

“I was sitting in Haile Gebrselassie’s office.  You know, the retired Ethiopian long distance Olympic Gold runner?  I asked him what was the one thing that has served him most in life.  He sat there a moment and said “the afternoon nap”.  Rest is the most important lesson I learned from the Ethiopians.”

Yep, we’re with you on that.  Some of us have recently discovered the power of an afternoon nap ourselves and can’t recommend it highly enough!  Obviously, we do it after work.  No kipping on the job you understand.  What’s your regime at the moment?

“I run everyday except Sundays.  I do my long runs at the weekends, I aim for 100 km over the weekend or 60 miles.  This weekend I did a sleep sandwiched run.  I covered 30 miles had three hours’ sleep in my tent, woke up and carried on running.  I’m training myself to be more efficient.  I want to do this supported attempt in a self-supported fashion.  I want to have the ability to leave the crew (my mum) and head on out on the trail meeting up with the van the next morning.  Back-to-back sleep sandwiched runs, that’s how I plan to do it.

Well we wish you all the luck in the world.  We are super impressed, inspired and motivated.  We won’t promise a 35 mile run ourselves but a two miler is on the cards and we’re certainly with you on the mental health aspect.  We plan on running with our thoughts rather than drowning them out with music: we’ll let you know how we get on.

← A tent porch could be the solution to your space problem Everyone's talking about Seaspiracy - what do you think? →